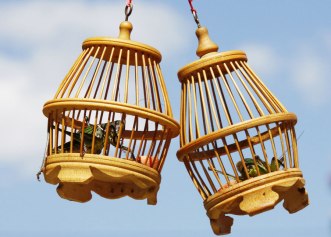 Those who have seen the film of The Last Emperor will remember this closing scene. When an elderly Puyi, the last emperor of China, returned to the Forbidden City, he took out a dust-covered cricket pot from under his chair and passed it to a boy who watched him with great curiosity. This scene vividly illuminates the Chinese cricket culture. The tradition of enjoying the sounds of singing insects and fighting crickets has ancient roots and has been handed down throughout the centuries to the present day.

Summer was my favourite season when I was young, it is filled with all kinds of warm memory, the taste of salty-sweet popsicles, the look of pretty red dress, and more importantly – the never ending noise from the singing crickets. Same as all of the kids in my lane, I am looking forward to see my new special summer pet, wondering if this time my daddy will bring home a chubby cricket or a small one? Is it going to be more green or more black?

But no matter how it really looks, I am always happy with whatever I get. It is common for the kids to compare each other’s beloved crickets. I usually feel really proud about my “little guy” and believe it is either the biggest, smartest, prettiest or going to enjoy a really long and happy life with me feeding him delicious green beans every day.

Cricket Culture in China encompasses a 2000 year history of both singing insects and fighting crickets. During the Tang dynasty (618 – 906 A.D.), people started to keep crickets in cages and enjoy their songs while in captivity. Under the Song dynasty (960 – 1278 A.D.), cricket fighting flourished as a popular sport. Therefore it is not surprising to learn that the primitive Chinese words of Summer ,”Xia” in “Jia-Gu-Wen”(oracle bones) take on the form of a cicada. Autumn “Qiu” words are in the shape of crickets.

While I know so much about the singing cricket, I was never really into the fighting games until I met with Master Chu. Chu Dehua is over 50 years old and consider himself a professional cricket trainer and breeder. 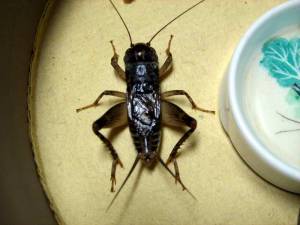 “Through playing with crickets, you can get to know a wide range of knowledge, like history, pottery, art, physics, geography and geology,” says Chu. During our first meeting, Chu spent over 3hrs telling me all of the unbelievable secrets and tricks in training, breeding and selecting his little gladiators. When it comes to the crickets, he is the man who knows it all. Chu is not really in it for the money but for the fun, and he never sold any his beloved crickets, to him, these crickets are his children, companion and a connection to the nature world. Chu is the official champion of Shanghai cricket fighting society, has been interviewed by national TVs and local news papers.

Traditionally only during the Chinese crickets fighting, males will be permitted to gain access to females. Mating actually make the males crickets become more aggressive and willing to improve their chances against other males. You can even find “crickets wedding beds” which is specially made for this procedure.

The color of the crickets isn’t that important. What really matters is that it need to have a big jaws to maintain a strong grip on its opponent, a strong but flexible neck to apply force and long legs to stand for its ground.

The crickets are weighed to ensure a fair fight then placed in a transparent box divided into two halves. The squat, brown mini gladiator are riled up with a thin fibre, which is brushed over their antennae, before the divider is lifted and they clash. Rounds are usually over in seconds; the insects grapple, separate and turn away. The one still baring its ‘teeth’ and ready to fight is the winner; if both are still ready to rumble, a new round begins.

Deaths, or even severe injury, are incredibly rare during the fight. According to Chinese folklore, when two male crickets engage in combat, the loser will refuse to fight again unless he’s shaken and tossed in the air by his trainer. But to know how to toss the crickets correctly, you need to practice for at least one month. Now Chu is working as a consultant and teacher in cricket field, fly around China every month following the top games and helping crickets players.

The Chinese appreciation of crickets actually extends beyond the appeal of their beautiful tunes and braveness. The fact that crickets are able to lay hundreds of eggs was in line with Chinese beliefs that the most important ingredient to success in life was to have as many children as possible.