Please Vote for Me 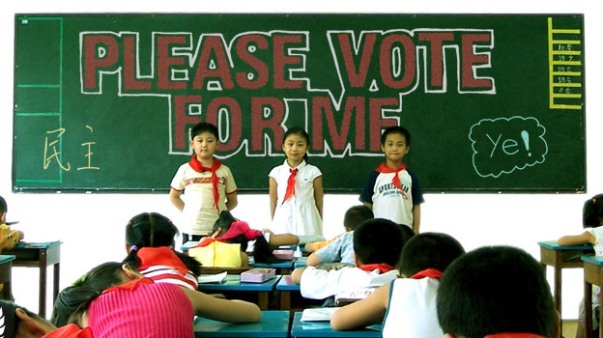 It’s about the class monitor elections for a class of Chinese elementary school students in Wuhan.  On a philosophical level, it’s about elections, choice, and the extent to which people manipulate systems.

Actually it is a lot of fun to watch the Chinese 3rd grade students elect their leaders. There are three children involved in the film’s class monitor race: Luo Lei, the incumbent, Cheng Cheng, a chunky little guy with his eyes on the prize, and Xiaofei, a sweet girl whose mother teaches music at the school. Cheng Cheng is the nastiest of the bunch, displaying a disturbing amount of political verve for an eight-year-old. From one day to the next, the same kid will change their loyalty based solely on who’s been the nicest to them that day—whether it’s Luo Lei giving out goodies in class, or Cheng Cheng reminding them that Luo Lei frequently beats them up for disobeying. It gets really confusing once the winner of the election is declared—the classmates don’t know whether they should be crying in sympathy for the losers, or cheering for the one who succeeded, so they do both. And in the end, one of them was able to win by giving everyone a mooncake coupon after the final speech.

Well, it seems so true that democracy is based on popularity which breeds corruption.

Today, a friend asked me “What is the most popular thing in the world?”

Guess what is the answer?