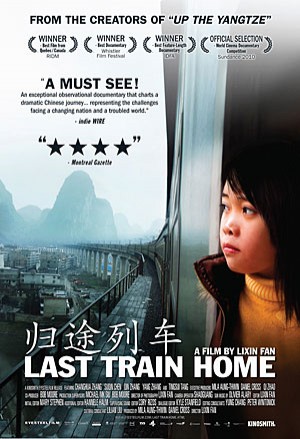 Got to know this movie from a German friend, it is depressing but fascinating at the same time. We all know about the problem, but what can we do to solve it? Can we still afford to have dreams? Do we really know what we want in life?

Every spring, China’s cities are plunged into chaos, as all at once, a tidal wave of humanity attempts to return home by train. It is the Chinese New Year. The wave is made up of millions of migrant factory workers. The homes they seek are the rural villages and families they left behind to seek work in the booming coastal cities. It is an epic spectacle that tells us much about China, a country discarding traditional ways as it hurtles towards modernity and global economic dominance.

Last Train Home draws us into the fractured lives of a single migrant family caught up in this desperate annual migration. Sixteen years ago, the Zhangs abandoned their young children to find work in the city, consoled by the hope that their wages would lift their children into a better life. But in a bitter irony, the Zhangs’ hopes for the future are undone by their very absence. Qin, the child they left behind, has grown into adolescence crippled by a sense of abandonment. In an act of teenage rebellion, she drops out of school. She too will become a migrant worker. The decision is a heartbreaking blow for the parents. In classic cinema verité style, Last Train Home follows the Zhangs’ attempts to change their daughter’s course and repair their ruptured family. Intimate and candid, the film paints a human portrait of the dramatic changes sweeping China.